We supply energy from the future, which is an ecosystem of innovative technology solutions fully based on clean green renewable energy. Our customers include large, medium-sized and small enterprises and individual customers who recognize the challenges of the future, including the need to change the way we are using energy. The products developed based on the Energy 2051 Standard prove that going to the green side does not mean higher bills.

Polenergia is the first Polish private energy group consisting of vertically integrated companies operating in the area of energy generation using renewable and gas sources and the distribution of and trade in electricity. The group was formed in the process of consolidating two asset groups controlled by Kulczyk Holding: Polish Energy Partners S.A. (focused on production of electricity from wind farms) and the Polenergia Group (focused on generation, distribution, sale of and trading in electricity and certificates of origin, and development of new energy generation projects). In May 2005, Polish Energy Partners SA made its debut on the Warsaw Stock Exchange. Following the consolidation of the Polenergia Group and Polish Energy Partners SA, PEP SA’s shares have been quoted as Polenergia SA since 2014.

We are changing the face of the Polish energy sector

Polenergia’s mission is to actively support transition of the Polish energy market through development of low-carbon economy, clean and renewable energy sources as well as striving to the achievement of climate neutrality in the European Union in 2050. Polenergia believes that Poland may play an immense role in energy transition of the Central Europe. In order to achieve this goal, it uses state-of-the-art, effective technologies as well as knowledge and experience of the management and operations team.

We are building a diversified base of generation assets and developing solutions that enable effective demand management and provide flexibility for distributed sources. We offer a wide range of products that guarantee zero emissions, including e-mobility and heat supply.

We are moving the digital communication channels already used by banking and telecommunications providers into the energy world. We effectively use digital tools to build partnership relations with our clients.

Our activities include: development and construction of RES production assets, energy generation from renewable sources and low-emission gas sources, distribution, sales of and trading in electricity and trading in certificates of origin and CO₂ emission allowances, as well as development of green hydrogen production projects

Capacity of RES projects in operation

capacity of electrolyzers for hydrogen production in development

We attach great importance to our communication with the capital market, in particular with the investor community. Polenergia has been quoted on the main floor of the Warsaw Stock Exchange since 2005.

The values that define Polenergia include: 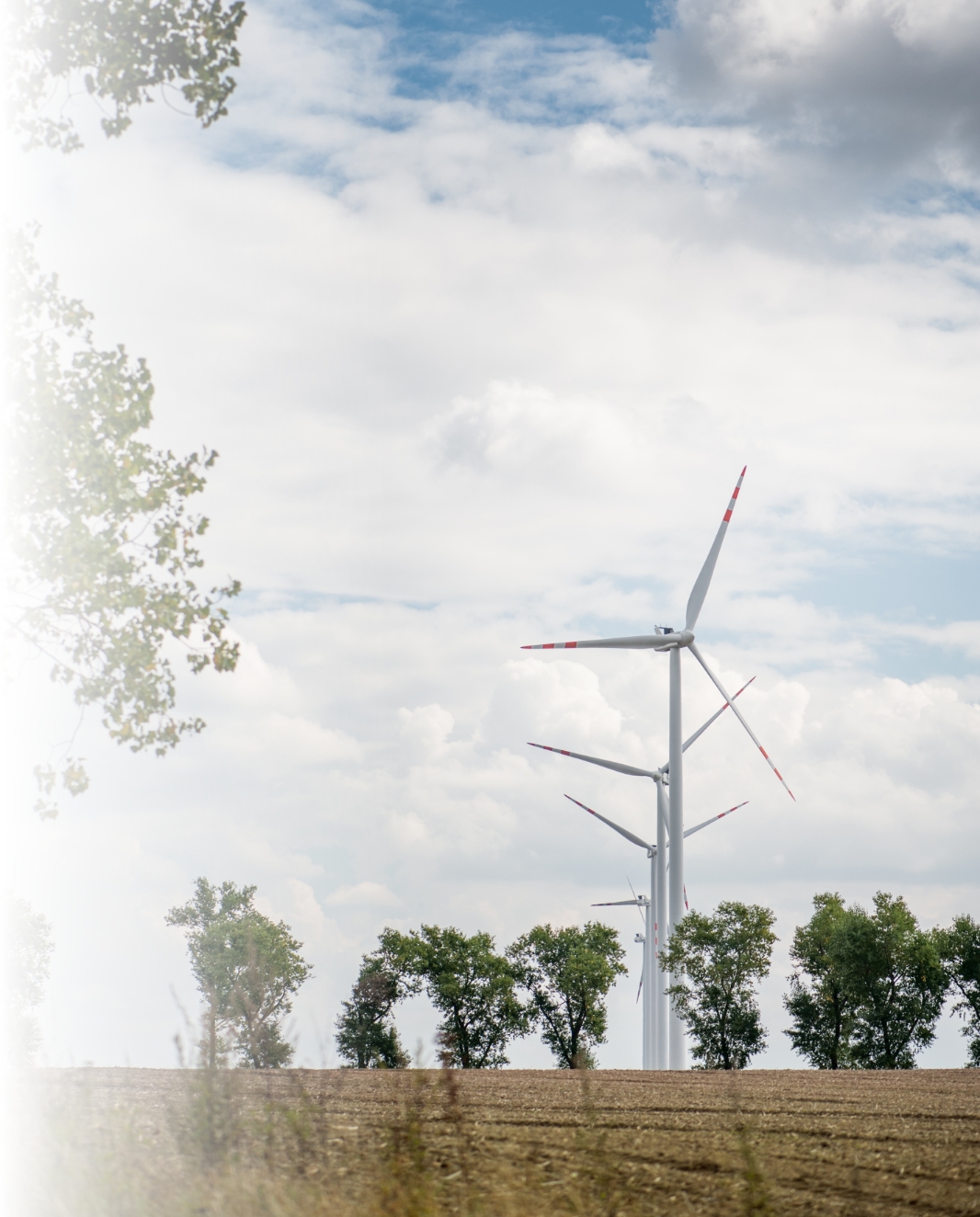 The business of the Group includes the following key areas:

The new directions of the Group’s strategic growth include: energy storage, energy recovery from other products, other innovations in the energy sector and expansion to international markets.

Modern energy production based on renewable energy sources cannot exist without the development of the domestic supply chain of machinery, materials and services. This is why Polenergia supports the cutting-edge solutions in the area of generation, distribution and trading in energy, using domestic and local contractors and suppliers. The development of Polenergia contributes to the economic growth of Poland and the region and will have a permanent, positive impact for the future generations.

For 25 years now, Polenergia has been the leader and pioneer of transformation on the energy market. It is the first energy group in Poland, which has been effectively implementing the development strategy based on its own, state-of-the-art energy sources. Zero-emission assets in the onshore wind farm and photovoltaics segments are balanced with efficient low-emission gas-fired co-generation.

We are one of the largest producers of energy from onshore wind farms in Poland. Until the first wind turbines in the Baltic sea are launched, this segment of our activity will remain the main source of clean, green energy that we supply to our clients in accordance with the Energy 2051 standard.

Our first wind farm located in Puck, consisting of eleven wind turbines, was launched in 2007. Since then, we executed 9 projects in this category with the total capacity of 287 MW. In 2021, our onshore wind farms generated net more than 680 GWh of green energy, which was sufficient to power 340 thousand households.

As a result of the most recent investment project implemented by Polenergia, i.e. the Szymankowo Wind Farm, which was commissioned for use in August 2021, we added as much as 38.2 MW to our portfolio of operational wind assets. We are currently developing 4 new onshore wind projects. We always select the best market-tested technologies.

Leveraging its experience in the wind farm segment, Polenergia successfully took a position in the photovoltaics segment. In 2019 it launched the first large-scale photovoltaic farms in Sulechów with the total capacity of 8 MW. In early 2022, Polenergia plans to complete the construction of photovoltaic installations with the total capacity of nearly 29 MW.  We are currently working on developing new projects that will add several hundred MWs to these figures. Some of them are very advanced and likely to move to the construction phase in the coming years.

The Act on the Promotion of Electricity Generation in Offshore Wind Farms signed by the President of the Republic of Poland in January 2021 is a milestone in energy transition efforts. This legislative act has established the legal framework for the construction of first offshore wind farms in Poland and allows for full utilization of the Baltic Sea’s potential for electricity production.

The right to cover the negative balance of the so-called “contract for differences” granted by the President of the Energy Regulatory Office in 2021 guarantees that the price for electricity generated in an offshore wind farm and injected into the grid will not be greater than the price set by the Minister of Climate and the Environment in the regulation of 30 March 2021, i.e. PLN 319.6 per 1 MWh. This support was an important step on the way to the implementation of MFW Bałtyk I and MFW Bałtyk III projects, which were thus included in the first development phase of offshore wind energy in Poland.

On 31 December 2021, Polenergia agreed on the key terms of a joint venture with the Lithuanian company Modus Energy AB (operating under the Green Genius brand), with the goal to develop offshore wind farm projects in Lithuanian territorial waters of the Baltic Sea.

Starting in May 2020, or since the strategy has been announced, the Group also engages in the development of green hydrogen projects, in which hydrogen is produced through electrolysis of water by using clean green energy. In particular, the Company focuses on a large-scale project of a 100MW hydrogen factory supplying green hydrogen to be used as a raw material for the industry and as fuel for zero-emission transport. The Company is also working on making the Nowa Sarzyna Cogeneration Plant partially hydrogen-fired.

Polenergia has competence not only in the development and production of energy from RES and conventional gas sources, but also in the trading and distribution of electricity and development of new technologies. By accumulating the knowledge and experience from all Group Companies, the Group has been able to effectively manage the entire supply chain from energy production to energy sales, while correctly forecasting the direction of development of the entire energy market and consequently optimizing its activity.

Polenergia Dystrybucja is a distributor and supplier of electricity for industrial, residential and commercial consumers, among others housing developments, production plants, office buildings and shopping centers. The company has presence in various regions of Poland. Polenergia Dystrybucja is the largest non-public distribution grid operator; only 4 Polish state-owned companies and E.ON operate on a larger scale. It is also the second largest DSO in Warsaw.

Entering on the electromobility market, the Group, operating through its dedicated company, Polenergia eMobility and through the companies handling sales to end customers, i.e. Polenergia Dystrybucja and Polenergia Sprzedaż, has launched a comprehensive offer addressed to individual as well as business clients. The offer features not only a charger, but first of all – energy from sun and wind to charge a car.

Polenergia Obrót i Sprzedaż is a Polenergia Group company running the wholesale energy and gas trade business, which supports companies operating in the Group and provides access to the market to external entities. The company offers energy to a broad range of end users. Even though the company is focused mainly on the Polish market, it also has presence abroad. In 2021, Polenergia Sprzedaż developed a unique product concept built in its entirety on renewable energy. The offer is addressed to medium and small businesses and to individual clients. Polenergia Sprzedaż supplies and guarantees, through the Energy 2051 standard, exclusively green energy from Polish generation sources.

The Fit for 55 plan announced by the European Commission explicitly points to the great need for expanding the existing green production assets, but also for developing prosumer installations, i.e. energy that is generated by its ultimate consumers from renewable energy sources in micro installations, for their own needs. This is why in 2021, the Group acquired Edison Energia Group companies, which offer photovoltaics, heating and energy optimization solutions, in particular: photovoltaic installations for private individuals and businesses, heat pumps, energy storages, photovoltaic carports, electric car charging stations, its own photovoltaic modules and smart home solutions. Their complements the Group’s activities in the area of installation and customer service in the distributed energy generation sector and strengthens its activities in the area of production and consumption of energy from renewable sources, including micro installation